He has completed his B.Sc ( Agric) in Agricultural Economics and Animal Husbandry at the University of the Free State and received the internationally recognized “Golden Key” award in 2016. 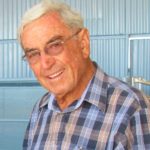 Albert van Niekerk started farming during 1953 after completing his
schooling at Paarl Boys High and two years training at Grootfontein
Institute of Agriculture. He already became involved with research and
tests on the Dorper breed during his period of training. He became so
fascinated with the breed that he decided that the logical choice was to
farm with Dorpers.

1956 – Joined the SADBS ( The Dorper Sheep Breeders Society of SA);

1966 – Appointed as inspector and does inspection country wide and in Namibia;

1968 – Co-founder of the Dorperland Dorper Club where he serves a Chairman for 10 years. He continues serving on the executive until his retirement to when he decided to focus more on his farming concern. During this period he offered several Dorper courses.

1969 – Elected to the council of the SADBS as Regional representative for North and North Western Regions. He is also elected as Vice President of the Society.

1987 – Appointed Farmer of the Year for the Free State and Northern Cape region;

1989 – Elected as President of the SADBS where he serves up to 1996. He is still an Honorary Vice-President;

1993-1996 –Received Honorary awards from the SADBS for excellent services rendered to the Dorper breeding industry as well as the  Dorper Breeder’s Society of S A.

1996 – Unanimously elected as Honorary Life Vice President of the SADBS and placed on the Honorary Roll.

1997 – Received Honorary award from Grootfontein Old Student’s Union  for his excellent knowledge and insight of farming, the development and establishment of the Dorper  sheep breed and the excellent contribution to agriculture and  its people.

SA under the ISO 9002 quality standard.

He was also involved with the founding of the Namibian Dorper Club (Now the Dorper Society of Namibia).

Klipkoppies Dorper Stud was one of the pioneers of the industry regarding record keeping and Performance testing in their stud.

Klipkoppies Dorperstud has exported their Dorpers to Namibia, Botswana, Zambia, Malawi, Kenia, Saoedi Arabia, Israel, United Arab Emirates and the Republic of the Congo.  Embryos have been exported to Australia, Brasilia, Germany and Canada.